The Pisces-born, that is, the people born under the twelfth Zodiac Sign - Pisces (Meena) - are the most intuitive in the entire Zodiac calendar. This Sign brings together many of the characteristics of the eleven Signs preceding it. Represented by a pair of Fish, the Pisces are spiritual, selfless and focussed on the soul's journey towards salvation. But, so caught up they are in their perfect, idealistic worlds that at times, they may have a tough time distinguishing the fact from fantasy. The Pisces may also have an ideal notion of how the things should be, which may leave them disillusioned or lost.

The Pisces are always torn between choices whether to seek the light or sink into the darkness. They are compassionate unless pushed to the wall, and when that happens they can be very caustic. But the sarcasm is not always direct, which is also the reason why it generally passes off unnoticed. The Pisces tend to lapse into melancholy if not heard, or into a kind of pessimism that can lead to wasting, procrastination and lethargy. 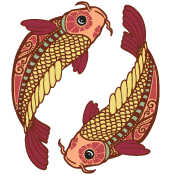 Otherwise known and liked for their kind and sympathetic nature, the Pisces are charming and possess a carefree approach towards many things in life. The going may get tough for them, once they have to follow rules or are required to match a certain level of discipline. When it gets overwhelming, the Pisces, in all likelihood, will flee and hide, while the weaker ones are likely to indulge in alcohol and drugs to escape. Some may pour out their emotions through creative arts, music or poetry, but most of them may seldom open up to those around them on a personal basis. Although brave and independent, the Fish are quite impractical, and may be somewhat uneasy while dealing with the real world. These unselfish and empathetic souls can easily be confused and may hardly get much done. Spiritual matters and occult science fascinate them to a great extent, and they love to delve in subjects related to them.

As mentioned before, the Pisces let their creative juices flow in order to express their emotions. Hence, these sensitive souls can reach great heights, if they choose to make a career in performing arts. Besides, considering how compassionate and charitable they are, Ganesha feels that the Pisces can do well in the medical field. Physics is another field they can be successful in. Besides, their obstinate independent streak rarely allows them be dependent on others. However, they are often distracted when bored and need to be more focussed and inspired to give their best. The Pisces hate to chase for the owed money as they expect that it will be returned voluntarily. If there are questions related to money matters, you may ask our expert astrologers for their advice on the monetary issues you have been facing.

Extremely romantic and emotional, the Pisces are generally gentle and relaxed people and modest to the point of impracticality. When in love, the Pisces are caring and romantic and extremely creative. They crave for fairytale endings, being more in love with the idea of love than being in love itself. Though strongly attracted to good looks, their attention span waivers at unintelligent partners, or at times simply because they secure the object of their desire. According to Ganesha, Pisces-Pisces, Pisces-Pisces and Pisces-Cancer make compatible companion.