People born under the Zodiac Sign Aries (Mesha), the first Sign of the Zodiac calendar, represent the raw energy of life itself. Impulsive, spontaneous and often self-centred, this Sign is symbolic of the innocence and egocentricity of a new born. This Sign is also symbolised by the Ram. Always fearless and brave almost to a point of foolishness, people born with the Zodiac Sign Aries live their lives on their own terms, often unwilling to compromise on their beliefs, ideals and ideas.

Truth is when these enthusiastic individuals set out to accomplish something, they ensure they achieve it, come what may. However, there is problem here! When their unbridled enthusiasm backfires, they lose interest just as quickly as they had gained it. Thus, no one begins like an Aries, but when it comes to maintaining the tempo till the end, many an Aries fail. Often where angels fear to tread, these high-spirited, energetic and optimistic individuals are willing to start. They take on difficult projects and challenges with an adept enthusiasm. 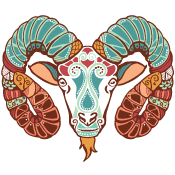 The Aries also tend to react in a physical way to everything, which may, at times, make them seem overbearing and dominating. The good thing is, however, that the frustration and anger are quickly forgotten, and the Aries becomes that lovable child yet again. The Aries, in fact, have an emotional and passionate nature, owing to which they are liable to make strong reactions, but they hardly mean wrong. The loving nature of the Ram inspires and flatters others, but it is their impatience and impulsiveness, which also puts off other people.

Charismatic, courageous and friendly that they are, the Aries can become extraordinary leaders, provided they learn to be diplomatic and patient. After all, it takes a lot of focus to to be a great leader. Also, when it comes to dealing with too many details and concentrating on a particular project/ task for a long period of time, the Aries often fail to handle it. They lose interest very easily, which may hamper their career growth. However, wearing the right Gemstone For Career progress may be really helpful to them.

Active, fiery Aries also have a tendency to bite off more than they can chew. Before taking something apart, they don't stop to wonder if they can put it back together. Besides, they constantly require others to motivate them to get going and do their best, and when they don't get it, they blame others for not being supportive and encouraging. But the fact is, it is an excuse for their own idleness and unwillingness to find a driving force.

Although many Aries don't seem romantic initially, they will profess undying love for their beloved - a promise they are most likely to keep, provided their beloved keeps the Aries fire going. Aries make caring partners, but at times they might expect too much from their life partner. This will be more so in the case of Aries men than the Aries women who tend to settle down more easily. As for the Aries men - they don't like waiting for things. Aries Compatibility with other Signs is quite interesting, but the pairs - Aries - Aries, Aries- Leo , Aries - Aquarius, Aries - Aires are the most compatible of them all. But then, a lot depends on the planetary positions in one's Kundli, too. Get a Couple Analysis done to know how compatible you and your beloved are with each other.