Navaratna is a Sanskrit compound word meaning "nine gems". Jewelry created in this style has important cultural significance in Hinduism, Jainism, Buddhism, and Sikhism, among other religions. 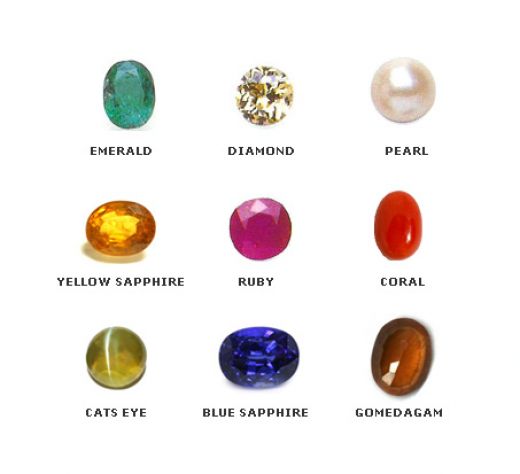 The ancient origin of the 9 Gems called Navaratna in Sanskrit, Hindi, Kannada, Burmese, Indonesian, and Nepalese, Navarathinam in Tamil, Navarathnalu in Telugu, Navarathnam in Malayalam, Navaratne in Singhalese, and Nawarat or Noppharat in Thai has proved impossible to trace.

Yet such importance is given to this combination of nine gems that they are recognized as sacred and royal in almost all the countries of Asia, including, India, Nepal, Sri Lanka, Singapore, Myanmar, Cambodia, Vietnam, Indonesia, Thailand and Malaysia, regardless of religious and cultural differences.

Although many kinds of Gemstones have been used by mankind for their healing and magical properties among all Gemstones the Zenith is held by the Navaratnas.

The Navaratnas/Navratnas are the sacred nine gemstones as per Vedic texts and Indian Astrology that have a profound impact on human life. These Navratnas are linked to the nine planets also referred to as the Navagrahas and are recommended after the detailed study of the Kundali/ Indian Horoscope.

Recommendation of correct gemstones by Vedic Astrology is an ancient art practiced and revered since eons and bring about magical changes in individual lives.

This quote attributed to the Sanskrit "Brihat Jatak" is also quoted in the "Mani-mala" page 575, verse 79 by S.M. Tagore (1879), and also in the ancient "Jataka Parijata," chap. 2, sloka 21 compiled by Sri Vaidyanatha Dikshitar,

Ancient Vedic scriptures and teachings have mentioned RATNAS or gem stones as one of the 6 pathways to alter the negative karmic life map and remove obstacles and emerge in life with the feeling of happiness and fulfilment.

The Vedic gems are also believed to of a therapeutic value. The Garuda Purana and Agni Purana have discussed the Science of Gemology and characteristics of Gemstones that bring about auspicious changes in life.

The Brihat Samhita has also discussed the healing properties of the various gems. And in many ancient cultures too gemstones have always been believed to have metaphysical powers.

Every sign of the zodiac is ruled by a planet and every planet has an associated gemstone, which in turn has the powers to harness the power of the cosmic rays associated with that particular planet and elevate a individuals emotional, mental and materials status. Even the days of the week are associated with planets.

The gems are also allocated with metals to be set in to give the best results of the planets. Even the fingers in which to wear a gem have been stated!

According to Hindu astrology, life on earth is influenced by the navagrahas, or nine influencers. The placement of the navagrahas in one's horoscope supposedly have an influence throughout an individual's life. Wearing the nine gems is said to provide an astrological balance and benefit to the wearer. Hindu astrology also says that these gems potentially may have both positive or negative influences on human life, and that astrological gems should be worn only after consulting a Vedic astrologer, who is also conversant with gems. Based on an individual's sidereal horoscope, either a single gem or a combination of compatible gems is advised to be worn to harness beneficial planets or counteract harmful planets.

The nine gems are associated with the nine planets of the zodiac and each stone has its own powers to heal people. The important nine gems are Diamond, Ruby, Emerald, Blue Sapphire, Yellow Sapphire, Red Coral, Pearl,Hessonite and Cats Eye.

Translation: Ruby for Sun, Pearl for Moon, Red Coral for Mars, Emerald for Mercury, Yellow Sapphire for Jupiter, Diamond for Venus, Blue Sapphire for Saturn, Hessonite for Rahu, Cats Eye for Ketu,
...these gems must be high-born (top quality) and flawless.