The Sanskrit word vastu means a dwelling or house with a corresponding plot of land. The vrddhi, vastu, takes the meaning of the site or foundation of a house, site, ground, building or dwelling-place, habitation, homestead, house. It has been noted that that Vastu was one of the greatest architect and town planning expert ever produced by India who lived thousands years ago.

Vastu shastra is an ancient doctrine which consists of precepts born out of a traditional view on how the laws of nature affect human dwellings. The designs are based on directional alignments. It used to be applied in Hindu architecture, especially for Hindu temples, and covers other domains, including vehicles, vessels, furniture, sculpture, paintings etc. The foundation of Vastu is traditionally ascribed to the sage Maamuni Mayan in South India, and Vishvakarman in North India.

According to vastu sastra, the world comprises five basic elements known as the pancha maha bhoota. Out of the eight planets, ours has life because of the presence and balance of these five elements. The five elements are as follows.

EARTH (Bhumi) - Earth, the third planet in order from the sun, is a big magnet with North and South poles as centers of attractions. Its magnetic field and gravitational force has considerable effects on everything on the Earth, living and non-living.

WATER (Jal) - This is represented by rain, river, sea and is in the form of liquid, solid (ice) and gas (steam, cloud). It forms part of every plant and animal. Our blood is mostly water.

The Vastu Purusha Mandala is an indispensable part of vastu shastra and constitutes the mathematical and diagrammatic basis for generating design. It is the metaphysical plan of a building that incorporates the coursly bodies and supernatural forces. Purusha refers to energy, power, soul or cosmic man. Mandala is the generic name for any plan or chart which symbolically represents the cosmos. 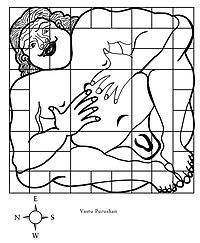 In Hindu cosmology or in Vedic Cosmology the surface of the earth is represented as a sphere and not as a flat surface, "Cakracasah parinaham prthivya" It says "people who reside on the surface of earth circumference" [Rig veda 1.33.8]. However in context of the earth as a home or resident it is represented as four-cornered in reference to the horizon's relationship with sunrise and sunset, the North and South direction. It is called Chaturbhuji (four cornered) and represented in the form of the Prithvi Mandala. The astrological charts or horoscopes also represent in a square plan the positions of the sun, moon, planets and zodiac constellations with reference to a specific person's place and time of birth.

The legend of the Vastu Purusha is related thus. Once a formless being blocked the heaven from the earth and Brahma with many other gods trapped him to the ground. This incident is depicted graphically in the Vastu Purusha Mandala with portions allocated hierarchically to each deity based on their contributions and positions. Brahma occupied the central portion - the Brahmasthana- and other gods were distributed around in a concentric pattern. There are 45 gods in all including 32 outer deities.

The Vastu Purusha is the presiding deity of any site. Usually he is depicted as lying on it with the head in the northeast and legs in the southwest but he keeps changing position throughout the year.

Vastu shastra prescribes desirable characteristics for sites and buildings based on flow of energy called Vaastu Purusha. The morning sun is considered especially beneficial and purifying however the sun does not play a specific role in the Vaastu shastras. In fact it is not mentioned in the texts. None of the heavenly bodies are mentioned in the Vaastu Shastras hence they are not considered in the proper application of Vaastu principles.

Vaastu is basically aimed at harnessing the higher energy levels within the self and can help in various aspects of life such as :