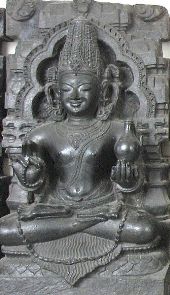 Shukra, the Sanskrit for "clear, pure" or "brightness, clearness", is the name the son of Bhrigu and Ushana, and preceptor of the Daityas, and the guru of the Asuras, identified with the planet Venus (with honorific, Shukracharya). He presides over 'Shukra-var' or Friday. He is Rajas in nature and represents wealth, pleasure and reproduction.

He is of white complexion, middle-aged and of agreeable countenance. He is described variously mounted, on a camel or a horse or a crocodile. He holds a stick, beads and a lotus and sometimes a bow and arrow.

Mercury and Saturn are its friends and the Sun and Moon are its enemies. Mars and Jupiter are neutral in friendship to Venus even though Venus considers Jupiter its enemy. Taurus and Libra are the zodiacal signs whom Venus rules, and Venus gives good results when placed in theses signs.

When rightly aspected Venus is strong, and it brings wealth, comfort, attraction to the opposite sex in the early part of life, a well-proportioned body, and the attractive features necessary for a sensuous nature. It makes its natives tender, gentle, and considerate; lovers of jewelry, sour (pungent) taste, white dress, decoration, perfume, tasty food, and the fine arts. It inspires them to be poets, musicians, and seekers of truth and knowledge (secret sciences). The native loves the company of the members of the opposite sex, artists, and musicians.

In Astrology, there is a dasha or planetary period known as Shukra Dasha which remains active in a persons horoscope for 20 years. This dasha is believed to give more wealth, fortune and luxury to ones living if a person has Shukra positioned well in his horoscope as well as Shukra being an important benefic planet in his/her horoscope.

The Navratna gemstone for Shukra is Diamond, it should be worn in ring finger and must be atleast 1 carat in weight, Diamond is to be worn on Friday to please Shukra.

The ill effects of Venus can be minimized and the good effects can be increased according to Indian mythology by doing the following tasks. Any or all of these, one can select as per one's convenience.